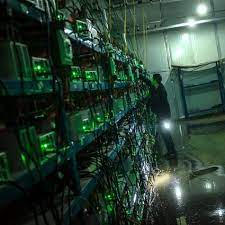 Chinese called upon a meeting from its biggest banks on Monday and decided to prohibit from engaging in crypto-related transactions.

The China’s crackdown on the cryptocurreny industry expectedly causes the miners to uproot their operations abroad.

Changepeng “CZ” Zhao, Binance’s Chief Executive Officer, said in an interview to Qatar Economic Forum on Tuesday that the company is seeing that a lot of miners moving out of China to other places.

This instability in the cryptocurrency market lowers the bitcoin trading range. It was observed falling to US$30,000 on Tuesday.

Dan Weiskopf, co-portfolia manager of the Amplify Transformational Data Sharing ETF, said in an email interview that the “China may make up less than 50% of Bitcoin mining by year end, down from 65%.”

He added, US, Canada, Swden and Argentina would be the alternatives to the China for mining operations.

The hashrate that measures computational power used in bitcoin mining shows drops of about 40% in the past couple of weeks.

As per weiskopf, “The decline in hash is probably a short-term phenomenon and evidence of China miners coming offline.”

“It is a net positive for North America miners who are now expanding and scheduled to have a lot of hash come online later in 2021 and into 2022.”