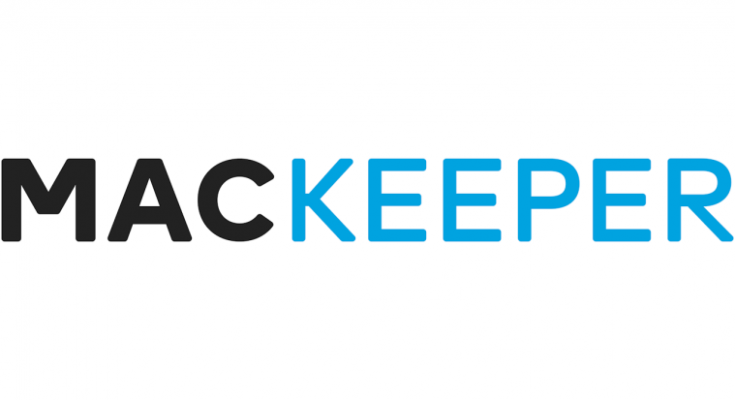 Mac computers are really previous device to offer amazing features but isn’t immune to malware attacks, according to most of the Mac users. Actually, the malicious actors can target even Mac OS based computers too, and installing a Mac based antivirus on computer is highly essential. And while choosing such options, if a security app offers you more than just security, then it would really be better. While speaking about such security app for Mac, MacKeeper is one fo the name that includes not only features regarding security, but also helps in maintainging privacy and performance.

Getting through its main window, it mainly indulges a menu on left side which is divided in various categories like Security, Cleaning, Performance, and Privacy. While on the right side, it includes a built-in chat option for users. Its default option is Find & Fix which includes a big button to launch the scanner , with a diagram of objects which will be scanned, and this section occupies most of the screen. Although, the screen may look a bit conjusted, still enough easy for users to navigate through the app. 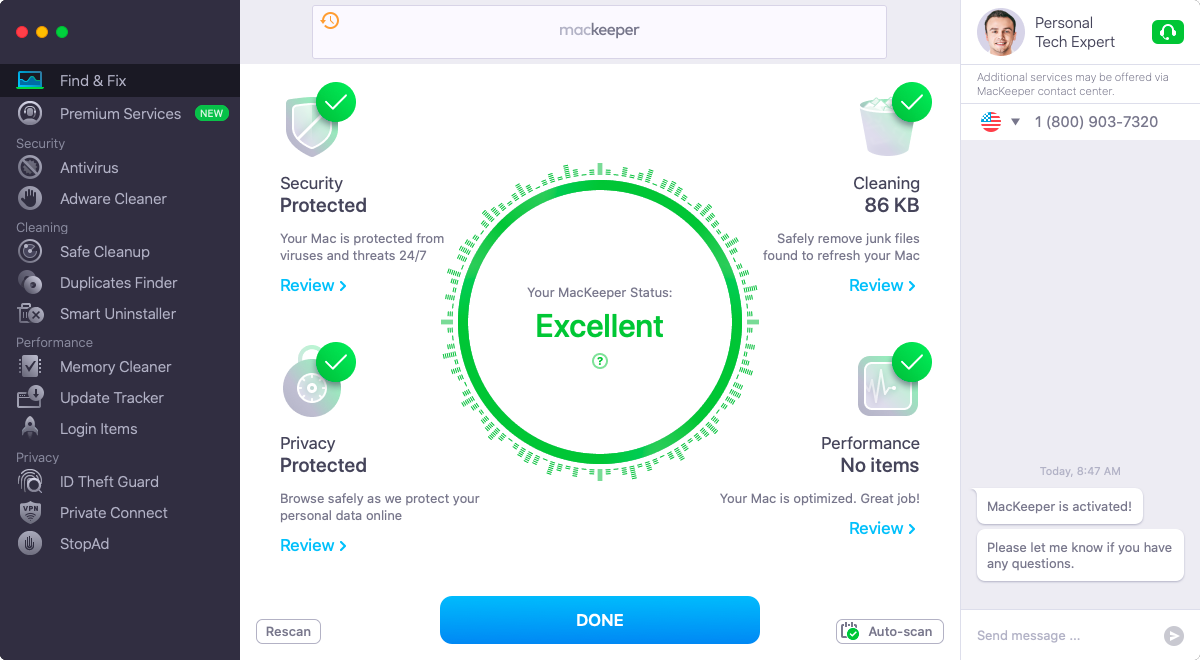 With the usage of MacKeeper, the users can avail a wide range of features which prevents their machine easily from various risks. For an instance, the app protects a Mac system from malware, ransomware, and other viruses too. So, your computer will be safe against all major malware threats without problems, and all you just need to choose this app. let’s talk about more features included under MacKeeper: 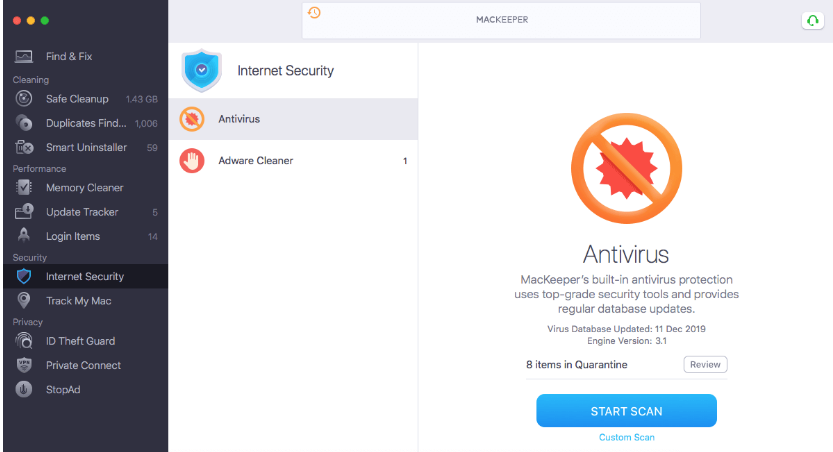 Antivirus scanner can be found integrated under Security tab and users can perform a system scan to detect any malicious files or malware on their device, if infected.

Based on various testings, MacKeeper is found to be much qucik in compare to other Mac OS based antivirus security software applications. It detects the threats and moves them under Antivirus Quarantine section from where users can easily delete them. 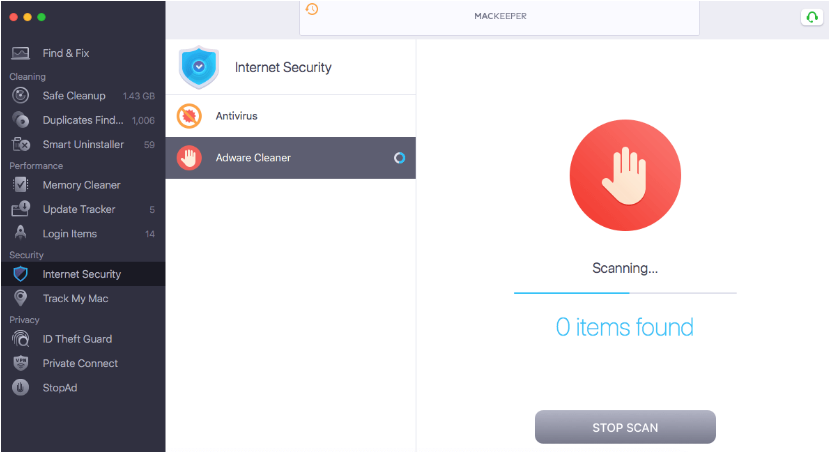 As the name suggests, this feature is actually a way allowing users to clean any adware if installed accidentally. Under this feature, the app will look for any installed adware threats no matters how old they are. The scanner is also fast enough and takes less time to find the threats. Once the scanner finishes detecting adware, users can delete those files easily. Adware applications might not be sometimes malicious but its presence should not be entertained and removed sooner. Overall the Adware Cleaner feature is much good and easy to use and allows users to have peace of ind to control all adware on their Mac. 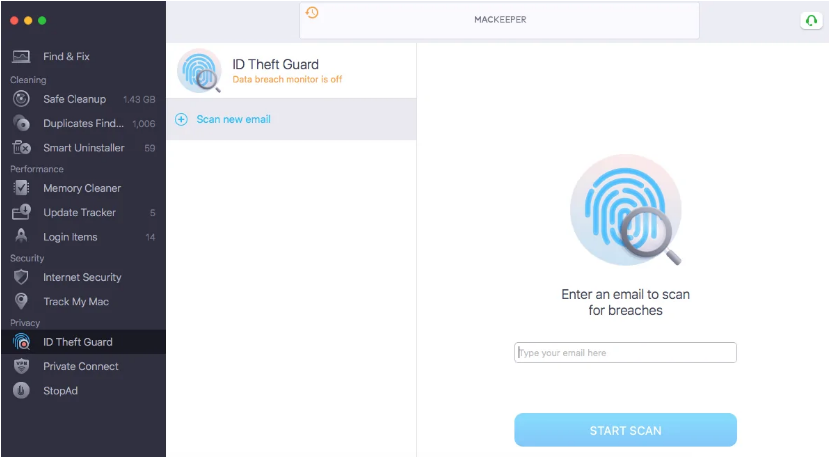 While having a computer, it’s a very essential thing to protect it against identity theft. For a Mac user, MacKeeper offers a way as well to prevent system against identity theft by offering this feature. The users can add their email details and the app app will automatically detect if the details have been exposed in a data breach.

In case if detects any detail that’s being exposed in data breach, it shows the users that how such details are breached, and how the system was affected, also prompts to resolve the issue by changing its login credentials. This way, MacKeeper can save user’s personal information from getting into wrong hands.

Means, once the scanner finishes its initial scan, it will continue to monitor your personal details on regular basis, and warns you if detects any sign of identity theft. 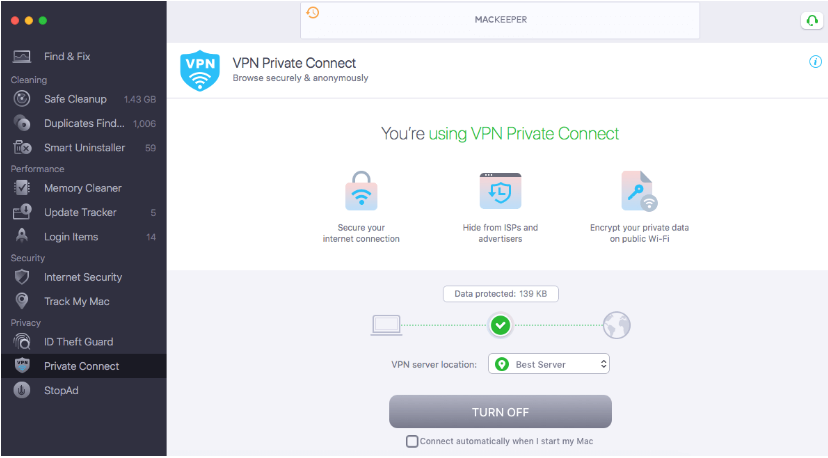 One of the useful feature bundled with MacKeeper is its integrated VPN which is named as “Private Connect”. Through this feature, users can protect themselves against hackers by encrypting their sensitive information, which is crucial as well specially while connected to public Wi-Fi connections.

In order to use this feature, the users need to switch on and off the Private Connect manually, also users can choose an option to automatically connect every time when Mac system is started. When getting connected, users can choose from various servers based on countries, otherwise the MacKeeper will connect to best server location if connected automatically.

While speaking about MacKeeper VPN plans, it comes with unlimited VPN data usage, so, the users needn’t to worry about running over data limits while connected. 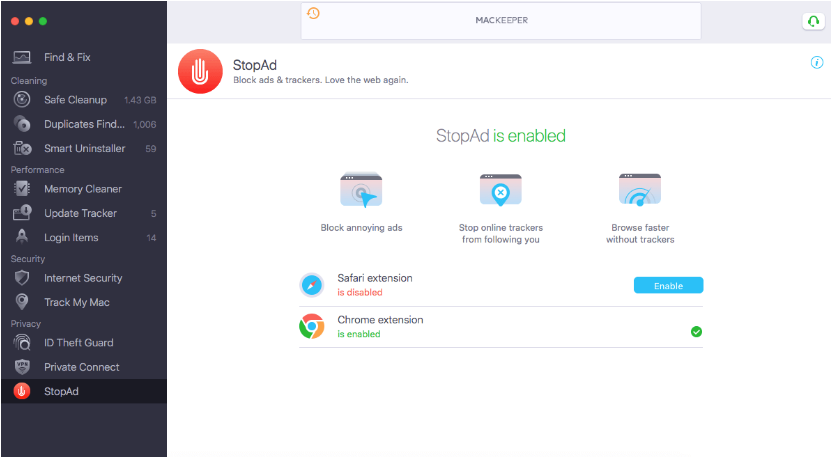 The feature called StopAd is simply a way allowing users to stop ads while doing some online activities. It actually adds a browser extension that is easy to install by just clicking StopAd tab under MacKeeper. Safari user needs to click on enable and follow on-screen instructions to activate the extension, while Chrome users will click on install and the app will redirected to Web Store to add StopAd extension. Means, just a few steps and the security app will allow users to stop any ads from any sites while doing online sessions. 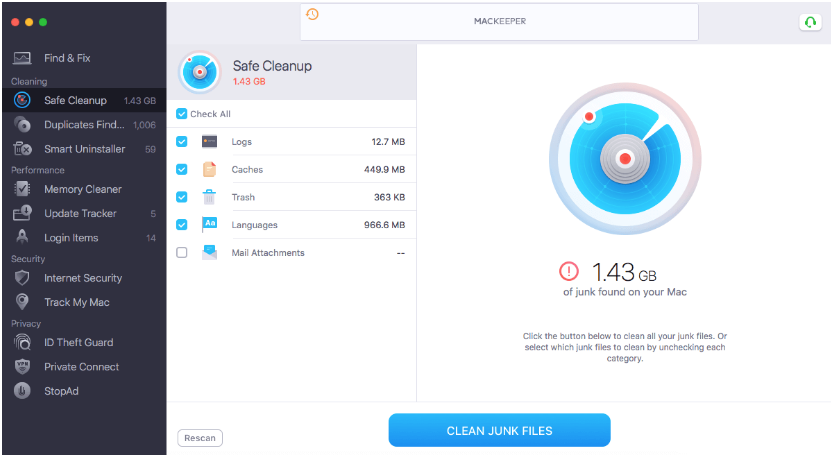 With the help of this feature, the MacKeeper scans the Mac system for present junk files that includes logs, caches, trash items, languages, unused email attachments, and many more, which are stored on device. All these files remain stored on Mac for long time and unnoticed which leads to issues like slow performance, and high end usage of hard drive. So, using this feature, Mac system can be cleaned easily against all such unwanted files easily. So, this feature is also very helpful if you have a large number of junk files stored on Mac and need to clean them. 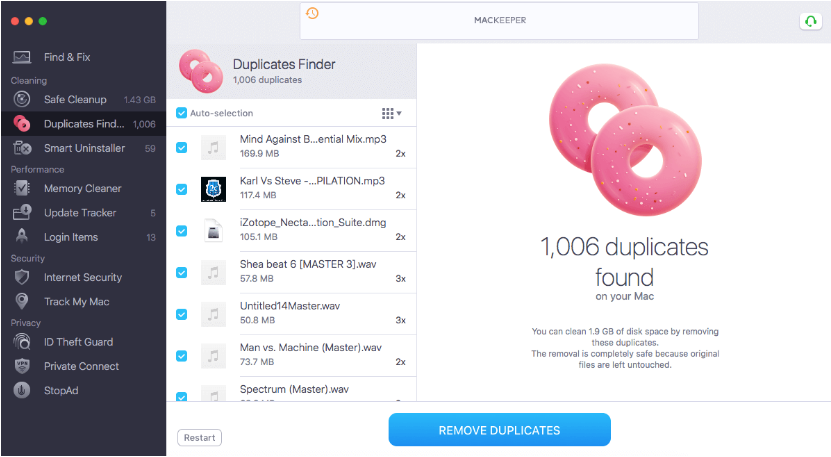 The term Duplicate finder simply indicates to a feature that will detect presence of duplicate files on computer and eliminate them. With the help of this feature, a user can save a large amount of disk space by deleting unnecessary files, also, the overall process is very fast. In inclusion, this option allows users to sort the duplicate files based on the size, number of duplicates, and many more. In case if a user want to keep a certain duplicates, they can deselect them from the duplicate list, before removing duplicates. And all these things can be performed easily. 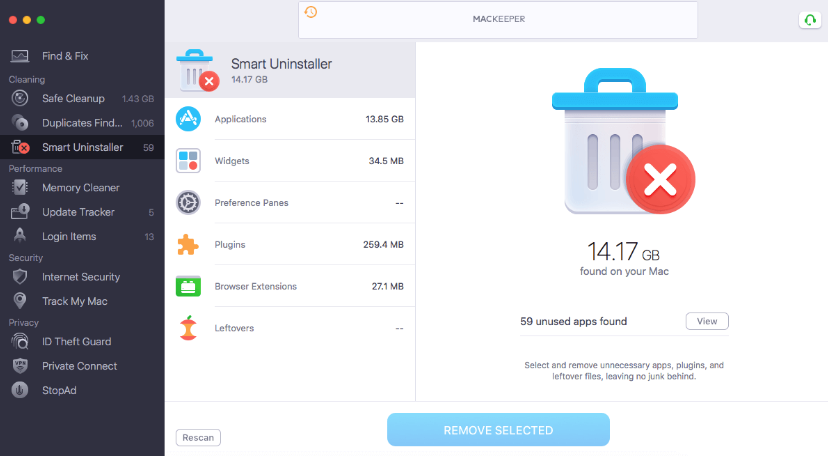 Obviously, the Smart Uninstaller is a feature allowing users to uninstall unnecessary ot useless applications from Mac computer. Such applications can be useless software, widgets, plugins, browser extensions, and so on. This feature is required because many a times it happens that removing an app becomes a tricky thing. Even moving them into trash fail to uninstall the app completely. But, with the Smart Uninstaller feature, the users can perform a quick and complete removal of selected applications, along with all its associated files and leftovers. Thus, this included MacKeeper function is very useful. 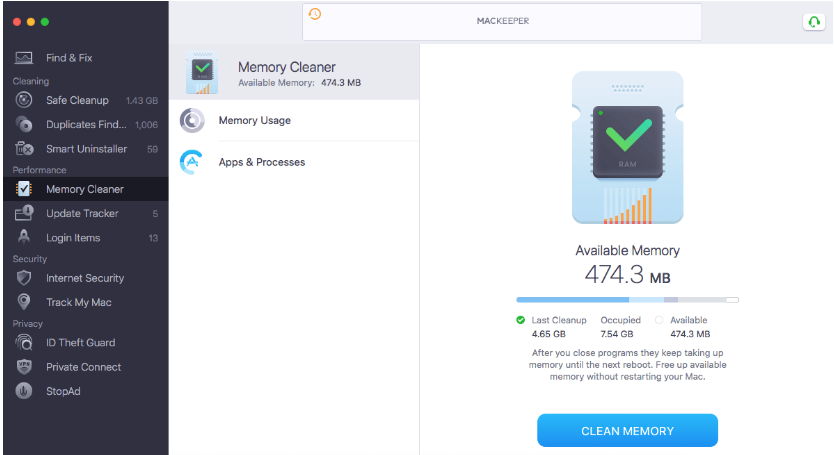 This option is dedicated to optimize RAM usage on Mac. It shows that how the physical memory is being used and helps users to free up their device’s occupied space to improve overall system performance.

In addition to these, the option also offers to select Apps & Processes to get a detailed breakdown of what applications are using the memory on Mac. To clean the memory on Mac, users can navigate to Memory Cleaner section and click on a provided button after which the RAM usage amount will be reduced.

Seapking about the pricing details, the security app seems to be expensive as it ask users to pay $16.95 on monthly basis, which sums around $203.40 per year. But, if the user chooses to pay yearly plan, they need to pay just $119.40, that can be divided into monthly cost falling around $9.95 per month. The users can also pay a more cheaper plan to pay $139 per year, that yields them protection for 3 Mac devices. Still, the users can get this security app for their Mac in more cheaper price as the company often use to offer discounts that is frequently changed time to time. To check your own, rush to its official page.

Based on various reports by users, the overall installation process of MacKeeper went easily without any issue. Once the app is successfully installed, it starts to scan the Mac system. As it’s already discussed, the scan window offered by the app displays 4 quadrants including Security, Privacy, Cleaning, and Performance. If the scanner detects any issues falling under any of these categories, such problems will be displayed in their own quadrant with red signal. However, if the scanner detects no issue, the quadrant will seem to be normal.

Since the Mackeeper includes the cleaning features, not just the app will scan for issues, but also look for junk files, duplicate files, leftovers, and many more. This detail will be served to users within Cleaning, allowing users to save disk space and enhance their disk usage performance. Based on the finding, the app will also recommend you to maintain Privacy recommendation as well, and the users can opt them if they need their privacy concerns to be more protected.

After the completion of scan process, the users can finish the scan and click on Fix Items Safely button to resolve found issues. that’s all to do and users can start their using their Mac system with more protection, privacy and enhanced performance.

While speaking about customer support options offered by MacKeeper, it offers various options that includes:

So, based on various requirements, users can take help of any of aforementioned support options, in which the live chat or phone support is faster, while the email support option may take time. Also, the live chat option is integrated under the software itself to allow users accessing customer support at an ease.

Conclusion: Considering all above mentioned details about MacKeeper, it can be a useful way for users to protect their Mac system against malware or viruses as well as identity theft. Even more of the bundled features can enhance your system and its usage. So, the software is overall a complete package and is recommended to Mac users.